Kilburn Unemployed Workers demonstrated outside Neasden Jobcentre yesterday to highlight the scandal of Employment and Support Allowance, a benefit for the sick and disabled. 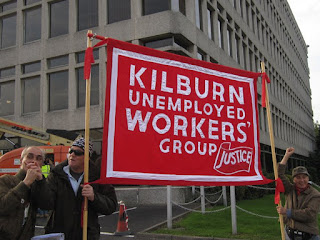 Entitlement to this benefit is decided by a medical examination outsourced to ATOS Medical who use a computer system, the Logic Integrated Medical Assessment (or LiMA) to produce medical reports with a minimum of human discretion or judgement.
Many, many people, who are clearly too sick to work are turned down for benefits under this system and face grueling appeal procedures to get the benefits they are entitled to.

Jodie Hart, who attended the demonstration explained the effect on her of being turned down for this benefit:

People like me, with memory problems, who are ill, we can’t cope with this, having our benefits stopping and starting. They push and push people and make us more ill. What they are doing is dangerous. People have breakdowns over things like this.

Kilburn Unemployed Workers will continue to fight Jodie's case and campaign against unfairness in the benefits system.
If you have any stories about Employment and Support Allowance, or any other benefit please do get in touch

Posted by Kilburn Unemployed Workers Group at 09:38 No comments:

Still on the subject of Medical Examinations:

Despite GP's accepting their patients are too sick to work, the government overrides their professional judgement now by getting private medical company "Assessments" to say they are well enough to work. The present government now wants to transfer NHS decision making and £80 billion of our monies to GP's despite not trusting them to know if a patient is well or not. Seems very contradictory! Seems like money saving exercises with excuses to hit the sick financially and reward private enterprise "scroungers" with lucrative contracts.

In the 1800's the workhouse was used to stick poor families in to save ratepayers money and attempt to discourage the poor from begging off the community. Life in the workhouse was actually designed to be as awful as possible so people would avoid going into them in the same way that people avoid going to prisons. What they found out though was that a lot of people were too genuinely sick or old and inform to work either outside or inside the workhouse and an infirmary would need to be set up attached to the workhouse. this is how infirmaries and hospitals originated and how eventually pensions had to be set up, as the so called "workshy" were plainly just too ill or too old.

Now it seems the main political parties want to blame welfare claimants for the financial crisis that millionaire bankers caused. Getting someone off Incapacity Benefit or Employment and Support Allowance, may save some money by forcing them to claim Jobseekers Allowance instead (although these benefits are the same as Jobseekers Allowance in the first year anyway!). The premise that these people will then go and get jobs (especially when massive job cuts are planned) is flawed. What will most probably happen is that unfit people will not go for jobs they cannot physically or mentally do and then the DWP will stop their Jobseekers Allowance and they will become destitute.

Ian Duncan Smith may be proposing incentives to get back to work but there is a clamoring to cut benefits and make claiming so onerous people will slip through the safty net that previous generations secured.

We believe that we should be pressurising the government to have progressive methods of dealing with the sick and unemployed not regressive ones. Do employers, or does the economy, really wnat to be hiring people who are too ill to sustain proper jobs (but who are officially "well") who will not last the course and theerefore waste everybody's time?

We say return to accepting that GP's know thier patient best and their sick notes should be respected and don't engage private medical services who will inevitably become incentivised and entrenched in knocking people off the sick for financial rather than medical reasons.

No return to the workhouse mentality! It didn't work in the 19th century and its not a reinvention the 21st century needs!

Figures from the Department of Work and Pensions show that only 18% of people claiming Employment and Support Allowance, the benefit for people our of work due to sickness, are found to be entitled to it!

The rest are either turned down or the cliam is closed!

The full report can be seen here:

Kilburn Unemployed Workers are not surprised by this! Our own experience tells us that many sick and disabled people are turned down for the benefits. This is largely due to flawed and unfair medical examinations.

If you have any personal experience with medical examinations: let us know: we want to hear from you!

In the meantime you can find some useful information on how to handle medical examinations on the Edinburgh Coalition Against Poverty Website:

http://edinburghagainstpoverty.org.uk/node/5
Posted by Kilburn Unemployed Workers Group at 03:39 No comments: