Kwuggies and friends at Caxton House as protectors of jobcentres, Monday 6 November 2017

KUWG and supporting friends: Gerry Downing with placards made at the last minute for us, Peter Murry of the Green Party Trade Union Group armed with a GP banner, Rebecca (a Nurse) and many more besides, converged on Caxton House, Department for Work & Pensions (DWP) headquarters, on Monday 6 November from 3-4pm, a chilly afternoon on which we warmed ourselves by giving David Gauke a roasting.

The four security guards stationed outside the front doors of ‘Cack’ House at first looked uneasy, then bemused, then hesitantly amused...and then supportive! One of them looked to be the most experienced, he actually yelled, "They're rubbish!" in support of one Kuwg’s rant about DWP policy.

The above mentioned Kuwg, had ranted until he turned their top security man! Another Kuwg asked this guard if he would go upstairs and fetch Gauke. He told us Gauke was out. Undeterred, she asked if there was a deputy! Uncertain if there was, he said he would get someone to come out to us. Apparently someone did come out but your roving report-backer had popped into a shop! We read aloud our statement Save our Jobcentres.

Rebecca — a nurse — spoke on the bullhorn quite few times, she told of the time a claimant had been sanctioned, such was his distress that he slit his wrists, she and her colleagues could not get through his despair to explain that he had 4 days to tell DWP why he shouldn't be sanctioned, in order get the decision overturned.

Nik — a Kuwg contributor — also on the bullhorn, very loud and very scathing, read a list of foul DWP regulations and asked if they thought these things right?

If you think things couldn't get any worse (for Gauke & DWP...KUWG & Co thought it was fab!) a Kuwg member starts singing the song with lyrics "I was cold, I was hungry, were you there, were you there?" she then answered the song in her speaking voice "Yes DWP! You were there, weren't you? You cut people's benefits and starved them! You were there alright!" and so on, a line of song, followed by her riposte.

Then there was Gerry Downing- the man who organised the placards during our placard drought. He wasn't short of words either. He led us on the slogans "Gauke for the walk!" and the uplifting, "Sack Gauke!" 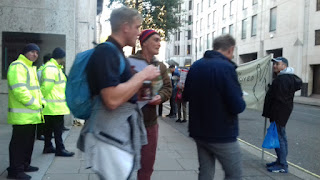 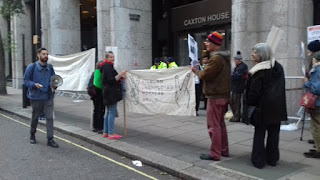 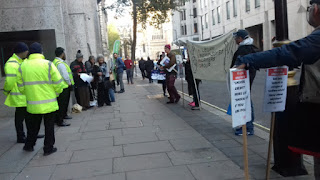 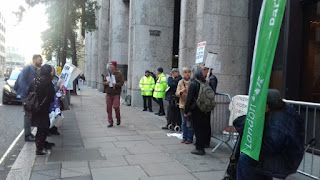 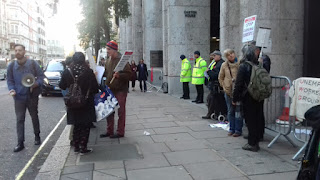 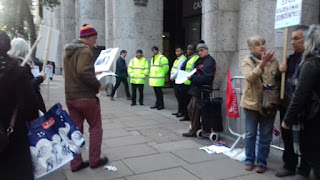